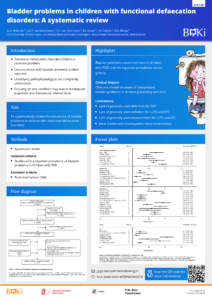 Methods: A literature search was conducted in Medline, Embase, PsycINFO and Cochrane library. Studies investigating the prevalence of bladder problems in children aged 4 to 17 years with functional defaecation disorders were identified. There was no language restriction. Two reviewers independently extracted data, and assessed study quality with a checklist for prevalence studies. Prevalence rates of bladder problems in children with FDD were extracted or calculated. Relative risks were calculated to compare the prevalence of bladder problems between children with and without FDD. Clinical heterogeneity between the individual studies was investigated in order to determine whether a pooled meta-analysis of the reported prevalence rates and relative risk would be appropriate and meaningful.

Results: Among 23 studies of children with FDD, 22 reported the prevalence of LUTS (12,281 children) and 7 reported the prevalence of UTI (687 children). LUTS (combined symptoms), LUTS (individual symptoms), and UTI had prevalence rates of 37%–64%, 2%–47%, and 6%–53%, respectively. The relative risks were 1.24–6.73 for LUTS (20 comparison LUT symptoms) and 2.18–6.55 for UTI (2 comparison studies), but the 95% confidence intervals indicated non-significance in 6 and 2 studies, respectively. Due to clinical heterogeneity in definition of FDD, definition of LUTS, and clinical setting a meta-analysis of the reported prevalence and relative risks would be inappropriate and meaningless.

Go back to ESPGHAN overview