Physiotherapy for functional constipation in children: Challenges faced when designing a randomised controlled trial and cost-effectiveness study in primary care 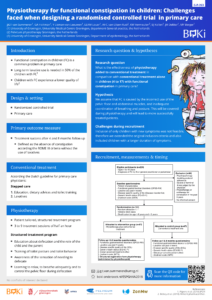 Methods: We designed a randomised controlled trial (RCT) of children aged 4–17 years with functional constipation diagnosed by a general practitioner or pediatrician (Figure 1). Children in the intervention group received pediatric pelvic physiotherapy plus conventional treatment, and those in the control group received conventional treatment only. Participants were followed for 8 months, at which point the primary outcome ˊtreatment successˊ was measured. This was defined as the absence of functional constipation according to the Rome-III criteria in the past 4 weeks, with no laxative use. Secondary outcomes were treatment success at 4 months, treatment success irrespective of laxative use, quality of life, global perceived effectiveness, and costs. The sample size was calculated with expected treatment success rates after 6–12 months of 50% and 75% in the conventional and intervention groups, respectively. Given an expected loss to follow-up of 10%, we needed to include 128 children (alpha 0.05, power 0.80).

Results: Participants were recruited from September 2014 to February 2017. Initially, we aimed to include children with recent symptom onset; however, during enrollment, many children and their parents considered that the symptoms were not severe enough to justify physiotherapy. Therefore, we decided to expand our eligibility criteria to children with a longer duration of symptoms. Comparison of characteristics of children included in the RCT (participants, n=134) and children who refused to participate or fulfilled exclusion criteria (non-participants, n=90) showed that children using laxatives on a regular basis in the year before inclusion were most inclined to participate in the trial. In addition, participants were found to be slightly younger (mean age, 7.5 ± 3.46 years) compared with non-participants (mean age, 8.23 ± 3.80 years), but the boy-to-girl ratio was comparable.

Clinical impact: The results of this trial will provide valuable information for general practitioners and others involved in the treatment of children with functional constipation, and for stakeholders involved in clinical decision making. During enrollment, we discovered that children and their parents were often unwilling to accept physiotherapy at an early stage of the condition. This means that physiotherapy is probably not suitable as a standard treatment for children with recent-onset FC.

Go back to ESPGHAN overview